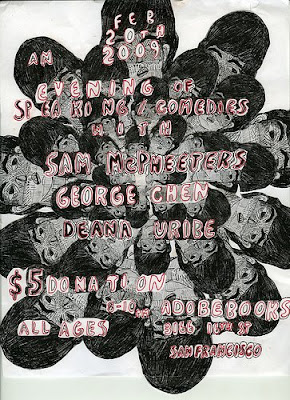 Sam McPheeters was born in Ohio in 1969, and raised in upstate New York. He is the former lead singer of Born Against and Wrangler Brutes, a founding member of Men's Recovery Project and the owner of the now defunct Vermiform Records. He lives in California with his wife, Tara, and their eleven cats.

George Chen is a freelance writer and musician based in Oakland. Music projects include Chen Santa Maria, KIT, 7 Year Rabbit Cycle, and running the record label Zum. He has performed "stand up" "comedy" about "five" times, all since seeing the terrible, terrible "Indiana Jones and the Kingdom of the Crystal Skull".

Deana Uribe is a poet, comedian, and student from Los Angeles California. She has performed stand up comedy twice, the first time at the Playhouse 7 Laemmle Theater in Pasadena and the second time at the Horsecow Gallery in West Sacramento. Her perfomances consits of elaborate long stories dashed with Satanic-stoner references. She lives in Felton, in the Santa Cruz mountains.
Posted by Adobe Books Backroom Gallery at Friday, February 20, 2009