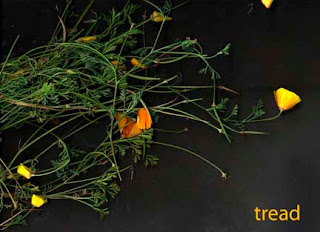 Adobe Books and Backroom Gallery is pleased to present a new site-specific installationby San Francisco artist Barbara Garber, marking her first solo exhibition. The focalpoint of the installation will be functional, handcrafted sandals that are designedto disperse California poppy seeds collected from California State Parks as theyare worn. Complimenting the sandals will be a large-scale photographic proposal for a California Poppy crop in the Mission District’s Dolores Park.

Part of a larger body of action-based work addressing preservation and urbanization, “tread” creates an object that operates in the spaces between these two notions. Strategically selecting California poppy seeds for their relationship to statehood and naturalization, the shoes suggest a special opportunity for invasion. Seeds embedded in the soles of the shoes were meticulously collected and studied, and now have the potential to be dispersed, like an organic GPS system.

Barbara Garber is also a native of California. She has been included in group exhibitionsthroughout the United States and abroad, most recently at The Garage, Soap, and Red Ink galleries in San Francisco and at Gallery Y in Tartu, Estonia. She completedher BA in Studio Art at the University of California Santa Cruz.
Posted by Adobe Books Backroom Gallery at Wednesday, October 03, 2007