"In an exhibition predicated upon the dance between the reign of categorization and the profusion of clutter, it might be just as instructive for the viewer to check out the show and then dive head first into Adobe's labyrinthine stacks. Wonder, after all, is a child of chaos. If nothing else, “The 770 Show” suggests an untamed world, ripe for the wrangling." - from Picture Books by Brady Welch in ArtSlant. Read the full article here
Posted by Adobe Books Backroom Gallery at Saturday, January 29, 2011 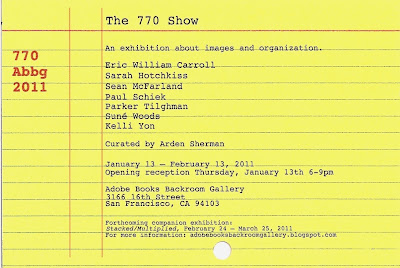