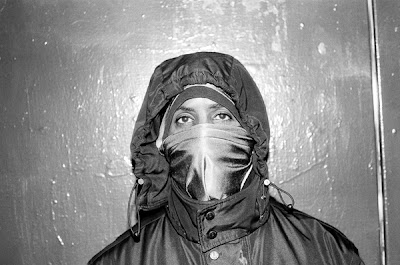 Adobe Books Backroom Gallery presents a one-night only exhibition of photographs to celebrate the release of Raphael Villet's zine "Man-o-Man-o-Man." Published by Hamburger Eyes, the new photography zine looks into how men create, survive, and reject constructed definitions of their gendered identities. The project compiles photographs taken in clubs, parks, buses, and dives during Villet's travels around Europe and the US, including San Francisco, Santa Cruz, Berlin, Budapest, Prague, Vienna, Lyon, and Rome. Raphael seeks to explore the different representations of being a man around the world and the different ways in which men express, reject or struggle with their identities. Ultimately the photos are self-reflective: Raphael seeks to log his insecurities through documenting others.

The reception will feature musical sets by the bands Meat Market and Indian Giver, from Santa Cruz, CA.

Raphael Villet is a film photographer from San Francisco. Born in Melbourne, Australia he moved around Africa before settling in SF in 1998. He recently received a BA in Sociology at UC Santa Cruz and his photography has been featured in Romka Magazine, fecalface.com, and in several group shows. He has interned at the Sesnon Gallery at UC Santa Cruz as well as the Harvey Milk Photo Center in San Francisco which everyone should be a member of! This is his first solo exhibition.

Hamburger Eyes Photo Magazine is based in San Francisco and published bi-annually. Hamburger Eyes is off-set printed in black and white on glossy stock, perfect bound with a cardstock cover, holding 150 pages at a run of 3000 copies. Hamburger Eyes is carried in shops, stores, libraries, galleries, and museums across the entire planet. www.hamburgereyes.com﻿

Posted by Adobe Books Backroom Gallery at Monday, May 23, 2011