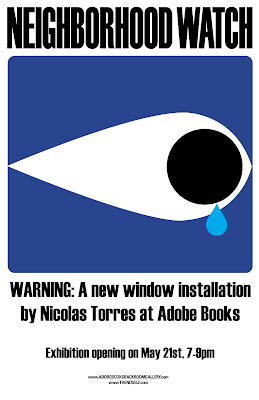 Neighborhood Watch opens Friday, May 21, 7-9PM and runs through June 20, 2010.
In Adobe Books Parlor, an exhibition venue in Adobe Book's storefront windows, Nicolas Torres presents Neighborhood Watch, an installation by the artist exploring – and exploiting – the accretive motion of a city’s attempt to eliminate urban blight.

In a city where rigid class and racial borders once prevented individuals from traveling through certain neighborhoods, you now have many neighborhoods where culture and demographics can shift with the crossing of a street. Along with the changing visual characteristics of neighborhoods, you have changing ideals. While one may see urban renewal as an attempt to beautify and improve previous conditions, another may feel that the benefits of urban renewal are disproportionately shared among its renewers. In any case, there are many stories to be told, and more importantly there are many stories being disposed of permanently. In his new installation, Nicolas Torres attempts to capture a few of the endangered ones.

Nicolas Torres was born in San Francisco in 1981 and has lived throughout the Bay Area. Torres received a BA in philosophy from UC Berkeley in 2008. His parents and their struggles, have been the fodder and inspiration for much of his work.

The Adobe Books Parlor is part of a long-term curatorial project that commissions artists to explore how the bookstore locates itself within the constant flux of the 16th Street environment. The series seeks to animate the intersections between private and public narratives, and among Adobe Books’ social and commercial spheres.